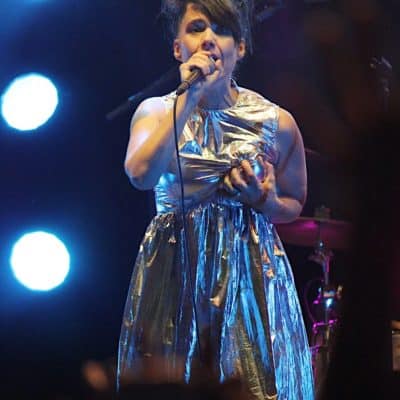 The weekend of September 13th marked the return of Chicago’s annual Riot Fest. Soon KZSC took to the skies to cover the beloved music festival, which originated as a small, multi-venue weekend of punk and punk-spirited rock in 2005. By 2012, it moved outdoors, incorporating all the fixtures of a large music festival, including carnival rides, deep-fried food, and Lucha-Libre wrestling, eventually spawning sister festivals in cities such as Denver, Toronto, Dallas, and New York.

In its fifteenth anniversary, the lineup has gone a long way since its original 2005 lineup of mostly classic punk acts such as Dead Kennedys, Misfits, Germs, and Agent Orange. Headliners from this year’s festivities included legacy punk acts such as Descendents, Jawbreaker, and the newly-reunited Bikini Kill, with many pop-punk, commercial, and alternative bands that are no stranger to the festival such as Blink-182, Rise Against, Ween, and The Flaming Lips. They came with the usual addition of ska, skate punk, left-of-center indie acts, emo favorites, some naughties’ indie stars, new wave, metal, the “Hip Hop Headliner” Wu-Tang Clan, and some stray noteworthy additions such as Village People performing YMCA for a sea of tattoo-clad punks and the final Chicago shows by The B-52’s and Slayer.

Spread out in three days and throughout five stages, the festival was well-organized without many delays or changes to the schedule. Here are some of our takeaways from the 15th Annual Riot Fest:

Riot Fest was a plethora of punk subcultures converging in one space. Walking from stage to stage to see each act was akin to walking through different exhibits in a museum, where each exhibit is a crowd of denim and eccentric hairstyles gazing at idol-like figures onstage. One minute you’re watching hundreds of wannabe Rude Boys with Specials tees and cryptic No Doubt tattoos skanking to Save Ferris, The Selecter, or Rancid; the next you’re surrounded by couples in matching Blink-182 and Alkaline Trio merchandise.

Some of these groups made up more of the festival than others. Aside from the very dedicated metalheads who came on Day 2 to see Gwar spew fake blood on them, Anthrax play an audience request set in Bulls Jerseys, or Slayer’s final Chicago show, a large majority of the acts performing at riot fest were some form of pop-punk, melodic hardcore, or emo. There were no limitations to this spectrum. Bands ranging from Teenage Bottlerocket to Avail, H2O, and Angel Du$t dominated the lineup. While many fans of the Descendents’ early SST recordings came to see their evening set, many more weren’t disappointed to find the Descendents playing their poppier Epitaph output while waiting to see Blink 182 or Jawbreaker.

While there were several non-punk emo acts, such as nearby Urbana-based band American Football, whose eponymous post-rock and math rock-laced debut album solidified their legacy in the emo canon, most of the emo acts had a twinge of punk or pop-punk to them. Taking Back Sunday, whose emo-infused punk brought an hour and a half-long performance of their albums Tell All Your Friends and Louder Now, garnered a large crowd counter to Bikini Kill’s reunion set.

Aside from these crowds there were also many at the festival to see more left-of center indie rock and punk acts such as The Garden, No Parents, and Cherry Glazerr. It was interesting to see who this young audience of artsy teens and twenty-somethings came to see later in the day, once the younger artists had finished performing. Many of them came to see college radio punks of yore such as Hot Snakes, Violent Femmes, and Bikini Kill. Others with some emo tendencies were excited to witness a rare performance by Jawbreaker or to belt out lyrics to American Football.

Old Punks Never Die (They Just Stand in the Back)

Millennial crowds were treated to naughties favorites, with Ween performing The Mollusk in full, The Flaming Lips performing Yoshimi Battles the Pink Robots in full, Andrew W.K. putting on an energetic performance on a smaller stage, Bloc Party’s performance of their debut, Silent Alarm, and Jack White’s newly reunited The Raconteurs’ bluesy garage rock. Gen Xers had a lot to see including Bikini Kill, Hot Snakes, and Violent Femmes, and many had to choose between seeing a rare Jawbreaker performance or relive their Blink 182 phase, watching them perform Enema of the State in full; a decision that sparked some gaffing between concertgoers over which act was the better act to see. Then of course there were artists from the 70s and 80s who have since gone solo or acquired new bands, such as Husker Dü’s Bob Mould, Patti Smith, or power pop pioneer Nick Lowe performing with Luchador mask-clad surf rockers Los Straightjackets. Additionally, The B-52’s and Slayer are on their final tour before retirement and garnered large audiences eager to see them perform one last time in the Windy City.

It was touching to see many of these older artists dedicate songs in their sets to friends and colleagues who’ve passed away. Patti Smith dedicated a song to MC5’s Fred “Sonic” Smith”, while Bob Mould dedicated the Husker Dü portion of his set to former bandmate Grant Hart. Wu-Tang Clan dedicated their performance of 36 Chambers to the late Ol’ Dirty Bastard by having his son rap all of his parts. And as predicted, The Flaming Lips mourned the recent passing of Daniel Johnston by adding a rendition of one of his greatest hits, “True Love Will Find You in the End”.

Punk has long been a stereotypically white-male space. This was an observation pointed out by several artists, including Bikini Kill, whose Day 3 headlining set preached feminism and inclusivity. They were one of the sparse big female-led acts to perform at the festival, and one of the few to address feminism outright, Kathleen Hanna quoted as saying “I’m sure Slayer talked about this too, right?” Belting out anthems of 90s feminism, such as “Suck my Left One” and “Rebel Girl”, the fans were chanting the phrase made famous by the group, Girls to the front, alluding to their notable acts of defiance and providing women a platform to express themselves and enjoy the show. Although there was not enough room for girls to indeed go to the front when there were thousands of spectators, Kathleen acknowledged their request by asking that any white male audience members give less privileged audience members a better spot to see the show.

Against Me! had amassed a large crowd during their double-album performance of Reinventing Axl Rose and Transgender Dysphoria Blues. Preaching love and acceptance, Laura Jane Grace sang to an affected audience for an emotionally-charged show. Fans could be seen holding up trans pride flags and crying as they sang along to uptempo renditions of the group’s folk punk and queercore catalog.

While Riot Fest, in the past, has booked storied punk acts of color such as Bad Brains, they have also booked many notable rap and hip hop acts as well, such as Cypress Hill, Digable Planets, Death Grips, and last year’s headliners, Run the Jewels. Although having reached mainstream mass appeal, hip hop shares similar origins and ideals to punk music. Having histories in underrepresented and oppressed cultures, hip hop and punk scenes have been known to overlap with each other for decades since their inception. This year, Wu-Tang Clan was the sole hip hop act. They noted this in their performance, saying they came to Chicago that weekend to represent the hip hop culture. Playing 36 Chambers in full, they ended their set with a short freestyle over The Beatles’ “Come Together” and blared Nirvana’s “Smells Like Teen Spirit” as people left their stage, as if to ironically connect to the audience. During call-and-response chants, most of the responses were hailing from the area directly in front of the stage, and silence fell over the audience as Wu-Tang Clan rapped along to “Shame on a Nigga”. Still, many who showed up to Wu-Tang Clan were in awe of their performance, which occurred at the same time as the performances of Andrew W.K. and the commercially successful, melodic hardcore band Rise Against.

Other than Wu-Tang Clan the other significant black-led acts were Village People, whose inclusion in Riot Fest may raise eyebrows but whose prominence in the Greenwich Village Disco scene is ideologically aligned with the punk ethos, and 2-Tone ska band The Selecter, whose frontwoman, Pauline Black, gazed at a crowd of mostly white concertgoers. She scanned the crowd for black people, and saw one, saying she felt “a little lonely” and stood in solidarity with them, dedicating a performance of “Black and Blue” to the black experience.

Riot Fest’s location in the neighborhoods surrounding Douglas Park is a bit of a jarring juxtaposition, when you compare the demographics of the festival attendees to the demographics of the largely black and Mexican population living nearby, South Lawndale’s “Little Village” district being known as the “Mexico of the Midwest”. After its inception, Riot Fest eventually founded the Riot Fest Foundation, whose mission has always been to give back to the community. Riot Fest’s first outdoor festivals were held in nearby Humboldt Park, where the festival organizers were (and still are) residing, and where there was a large Puerto Rican community. As Riot Fest started growing, the punk-minded organizers sought to share the wealth with under-served communities, starting with Humboldt Park, and eventually around Chicago, bringing business to these communities and donating many of the festival proceeds to local charitable causes. However, the lack of representation of these communities in the festival itself is hard to ignore, as there are only a few recognizable artists of color on the bill, and as families of color were mostly selling concessions to the swarms of white concertgoers flooding the streets. While philanthropy is an important part of the festival’s mission, representation should be equally emphasized, especially since there are plenty of artists out there who are either sonically punk or punk-spirited.

All in all, Riot Fest was a pleasurable spectacle in the power of punk mentality bringing people together. While there was limited water supply (only one source of water at the side of the park), a crowded late Sunday schedule (The B-52s, Bob Mould, and American Football at the exact same time; logistically hard to navigate between overlapping acts after 6:30) and temporary sound issues at one stage (see the fan comments on the Blink 182 set on Riot Fest’s Instagram), the festival was well received by audiences who were captivated by the music. Not to mention, it was enjoyable to see lines of distressed vests and tattoos waiting at colorful booths selling cheese curds and lemonade, or taking turns on the ferris wheel. In its 15th year, the festival has grown into a Chicagoan institution of sorts, as even our Airbnb host whose space was on the outskirts of Chicagoland could immediately tell we were heading there because of our muddy shoes and mild sunburns. Additionally, no matter where you went in Chicago, you’d see visitors from across the midwest and Rust Belt walking around in their many band tees and mild fatigue enchanted by the city’s copious amounts of green parks and towering feats of architecture lining lake Michigan.

DJ Hari hosts Parts Unheard and is a part of the S.C.P.D. collective on KZSC.