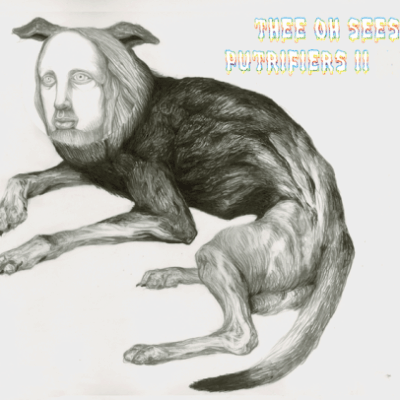 In recent years the San Francisco Bay Area has produced some of the finest garage rock acts around. With such acts as Ty Segall, The Fresh and Onlys, Shannon and the Clams, and Wax Idols calling the area home, the Bay Area has no shortage of acts to choose from. Leading the charge is San Francisco’s Thee Oh Sees, whose new album Putrifiers II is one of the best of the year.

Since their first release in 2004 Thee Oh Sees have been one of the most prolific bands in rock having put out fourteen full lengths, eight EPs, and ten singles in addition to being one of today’s hottest live bands. Fronted by singer/guitarist John Dwyer, Thee Oh Sees unique brand of frantic, grooving, psychedelic garage rock has reached new levels on Putrifiers II. Fans of older albums such as The Master’s Bedroom is Worth Spending a Night In, Help, and Carrion Crawler/The Dream will dig this record’s faster tracks such as the opener “Wax Face” and “Flood’s New Light.” Dwyer an company (including Santa Cruz loke Brigid Dawson) decided to try some new things out on this release with slower, trippier tunes such as “So Nice.” Other standout songs are the title track as well as the bouncing, cheery “Will We Be Scared.”  Really the whole album is killer so you should just check them all out.