On Sunday, March 3rd, Noise Pop reserved a space at The Independent in San Francisco for Rhode Island’s no wave/industrial rock force: Daughters. Fans waited eagerly to see Alexis Marshall and Co. perform live. Shortly after releasing their 2018 album You Won’t Get What You Want, the group was returning from nearly a nine-year hiatus, with their self -titled release in 2010 belived to be the final installment in their discography. Since the early 2000s, the band’s use of maddening synths, violent percussions, and uncanny power chords achieved a white-hot degree of success.

One impressive moment in their career would initially have to be their beginning, as they gained recognition for releasing Canada Songs (2000); an 11-minute long EP that contained numerous tracks and a single.

This time around, the band has gone even darker with their productions and is currently performing tracks longer than 5 minutes. Their latest album now clocks in at 50 min long. Indicating that over the years, the group has dedicated itself to strengthening durability (and impact) of its percussion and instrumentation. listeners are now entwined into even longer periods of distortion and insanity.

Their 2018 release You won’t get what you want is a riveting journey into the darkest corners of the human mind.  far better than any of its predecessors, the album gives several undertones of psychopathy, societal rage, and utter confusion. The production is riddled with a bit of blues and gothic spoken word, with each track being maddening, depressing, or frightening. This album can leave many listeners with the sensation that they are being chased by a monster that was left to rot in a back burner (or gutter… or sewer.)! With no hope of escape.

The night of the performance was quite surreal. The streets of Divisadero and Fell were plagued with light rain, dark skies, and thick fog. Yet,  the venue was crowded by many locals and anxious fans altogether. No one seemed to mind getting their shoes wet.

The line is backed up to the end of the street. As soon as doors opened, the show had sold out.  The only way to buy tickets at that point was to buy them off of two bouncers.

As doors opened, the venue was flooded by a sea of Goths, metalheads, and satanic cultists clad in denim jackets and thick beards. Everyone was anxious to face the hopelessness and noise torture that greeted them once inside. Every trace of wit and sanity was left at the main entrance.

A few minutes after 8:00, the opening act of the night began with the duo Hide. An experimental electronic group specializing in dark ambient and electronic. Vocalist Heather Gabel impatiently grabs a hold of the mic and screeches “ Hey Baby… I said Hey Baby!/ Are you Sad? She begins to writhe and convulse to a  flickering motion of the stage lights. As she does so, Seth Sher takes control of his mixer, scathing the amps with fuzzy, synthesizer riffs. She continues to wriggle and twists under flashing white lights. Every performance ends in utter dark silence.

Gabel brings t a mixture of abstract vocals and ominous undertones that fills the room with the sensation of being trapped in a hell of sound torture (How muchhhh?/When will you have \enough?). Additionally, one performance is controlled by Sher, who is working the synthesizer and playing a recording in the background, while Gabel begins to dance like a witch possessed and smiles menacingly at the audience. a sensual yet cringe-worthy performance overall.

The pace was then fastened by Hardcore metal band Gouge Away. Christina Michelle and co. demonstrated an energetic display of jived guitar riffs,  scattered bass lines, and plenty of ear-shattering (and soft) percussions.

The group inevitably ignites a mosh pit, with yours truly being pushed right into the fray. The momentum of the crowd was off the wall so to speak, with some loose change flying out of people’s pockets and water bottles being flung around. If anyone fell, however, a number of people would make an attempt to clear the space or lend a helping hand.

The night belonged to both the genuine and the wicked. Shortly after, I was volunteered into crowd surfing.

In the middle of their set, Michelle cools the crowd off with a few softer tracks, just to compensate for the intensity brought on at the beginning of the performance. In certain moments, the display of stage lights turned turquoise, which complimented her dreamlike, feathery voice. in contrast, her transitioning into fits of eerie wails would bring back the fury of the crowd, desiring any excuse to headbang over and over again.  The end of their performance left everyone in a roller coaster of adrenaline and delivarance, a prompt attitude to keep for the third and final act of the night.

At around 10:00 PM, everyone lost their minds. The stage lights are set to a devilish red. As if right on cue, in walks Alexis Marshall (vocals) Jon Syverson ( drums), Nicholas Andrew Sadler(guitar), and Samuel Moorhouse (bass). Marshall, in a quiet and glum voice, thanks to the crowd for their attendance and then faces backward…

In four taps of Syverson’s drumsticks, the band opens up with The Reason They Hate Me. Marshall promptly begins to bounce at the beat of his bandmate’s drums and at the end of Sadler’s eerie guitar riff, hypes the crowd by singing “You don’t tell me how to do my job!” The band essentially went on to perform a majority of tracks based off their 2018 release You Don’t get what you want.

Track after track, the band delivered a plethora of thunderous kick drums and scratchy power chords. They quickly jump into the head-banging noisecore track “the lords song”, which is met with Marshall’s visceral vocals. Wailing maniacly, “I cry about it…”

The third track of the night, Satan in the Wait shouts spoken-word riddled with death, doom, and despair. Face like he’d been sucking concrete through a straw… Some faces, not even a mother could love” .  In sync with the band’s eerie and distorted melody. A bone-chilling synthesizer further amplified the tone of the atmosphere. The song closes with Marshall depressingly yelling “today is tomorrow, someday and tomorrow is gonna feel like yesterday.”

The band then transitions into tracks from older projects. The Dead Singer is performed, where Marshall blatantly shouts “you can’t let it go!”  behind a series of chaotic guitar riffs and crashing symbols. 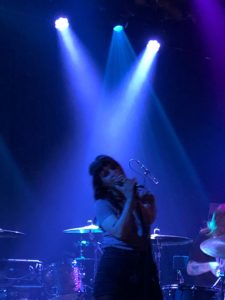 Followed by the destructive track “Recorded inside a pyramid”.

Other acts included “Long road, no returns”, and Guest House. At this point, Marshall breaks off into a marathon of angry percussions and themes of confusion and paranoia. He shouts “It may please your heart to see some shackled/ wrists and throat/ naked as the day they were. Each octave being raised as he vocalizes his frustrations with the society around him.

The Band’s overall performance was an intoxicating madness. The mosh pit further expanded, with folks reciprocating the same jump, vigor, and frustration Marshall himself was demonstrating. He would often throw the mic onto the ground in a fit of rage, stuff his fist into his mouth, and on one occasion, slapped himself around. This raw fit of energy was carried for well over an hour. The night was a splash of despair, technical advancements, and horrific sequences of noise throughout. The crowd of fans showed courtesy, vigor, and kindness, and everyone left the night losing a bit of their hearing. Thank you, Daughters. Thank you noise pop.