Charli XCX performed during a workout session led by modelFIT at the Propel Co: Labs Fitness Festival on July 20th, the first day of the two-day festival. The festival was located at the Santa Monica Barker Hanger. The two-day event also featured performers such as: Ciara, Chromeo, and Lucy Hale. 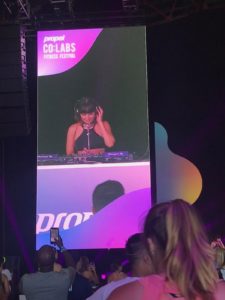 The workout session titled Sculpt it Like Its ‘5 in The Morning’ referenced the Charli XCX song ‘5 in The Morning’. The session began at 2pm and lasted for 45 minutes. During that time, the audience followed the modelFIT instructor, but not without pausing to take pictures and videos of Charli XCX perform. Especially when she performed ‘Boys’, ‘1999’, and ‘I Love It’ — her collaboration with Icona Pop and the song that got her famous.

While Charli XCX sang throughout the workout, a lot of the performance highlighted her DJ skills that motivated the audience to keep moving, getting a good burn during the workout. Personally, I was sweating and almost regretting the event, but it was worth it.

Charli XCX wore a black sports bra paired with a full body jewelry chain, black biker shorts, and sneakers. The last song she performed was ‘Fancy’ by Iggy Azalea, which she is featured on. This was post workout so Charli had the crowds’ full attention as they sang and danced along. This was the best time to take videos and pictures as well, since we were no longer busy with the workout. Charli XCX gave off an energetic vibe that motivated me to get through the full workout. I hope to see her perform again in the future.

Last month Charli XCX had a listening party with some friends for her new album so we will be expecting new music from her soon!